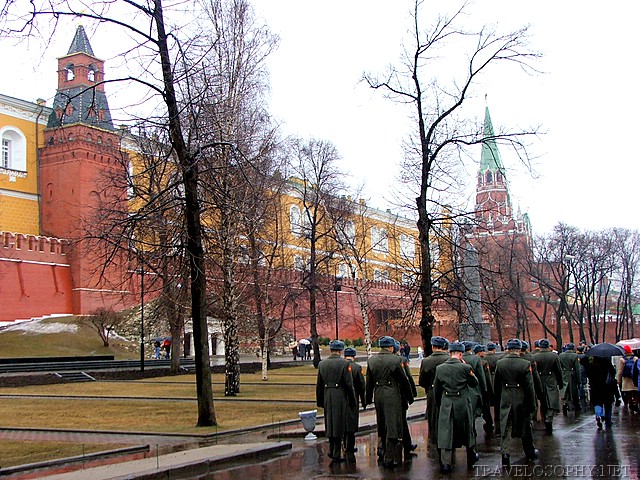 Next to The Kremlin Walls

Well-refreshed from our coffee break at the underground mall, we all gathered at the statue of Marshall Zhukov, close to the Resurrection Gate. The next event of our day was to be the Moscow Kremlin. It was still drizzling softly as we followed the walkway along the Kremlin walls, walking behind other visitors and some soldiers, towards the compulsory cloakroom and the tickets office. 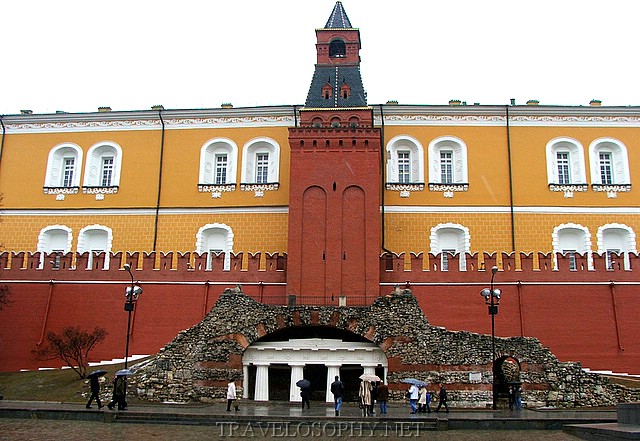 We crossed the slippery, stoned bridge and passed through the Trinity Tower above the fortified Kremlin walls, and once inside, I experienced the acute realisation of standing inside the epicenter of Russian power of past and present. We gathered on the steps of the first building, the modern looking Palace of Congress which was built in 1961 where an official guide, courtesy of our tour organisers was waiting for us. She was a middle aged lady with a friendly smile and professional approach. After introductions she proceeded to lead us through a maze of multiple sights inside the confines of the Kremlin walls, including towers and tombs, chapels and churches, cannons, icons, bells, bastions and more!

The Kremlin is a restricted zone and some areas, for instance the cobbled stoned roads, were out of bounds. This was put to the test almost immediately when a member of the group ahead of us stepped off the side walk which resulted in the shrill sound of a whistle being blown by an official, gesturing for the culprit to stay off the road. We gave their group some space to get ahead and Elena pointed out to a building across the way, previously The Senate, which today houses the offices of the President of the Russian Federation. 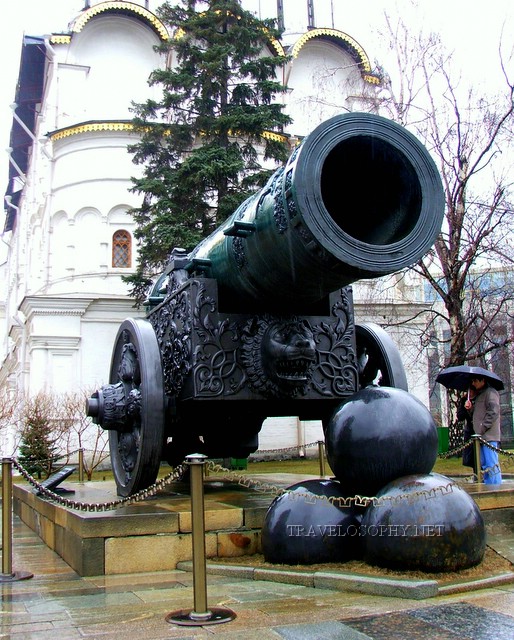 Shortly after we passed by the Church of the Twelve Apostles, we came across a “huge find”. As we walked we noticed rows of cannons on the lawn along the road, but none as impressive as the Tsar Cannon, one of the largest ever made weighing in at a massive 40 tones. It was apparently never actually used in war, but was “tested” by firing a certain person’s ashes back towards Poland in 1606. That privilege was extended to the first “False Dmitri”, one of two impostors who claimed to be the son of Ivan the Terrible. Once found out to be an intruder, he was dealt with by a mob and his remains ended up as fodder, with the benefit of proof that the Tsar Cannon does work! 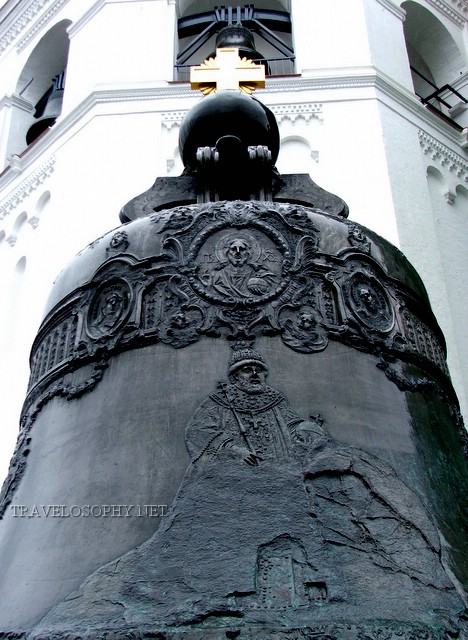 We continued our walk and behind the Ivan the Great Bell Tower we stopped at the Tsar Bell, the undisputed king of bells at a not-so-light 200 tons. The guide explained that due to its size it stayed in its casting pit for over a century after it was made, until a massive fire broke out at the Kremlin in 1737. The bell then shattered when cold water was poured onto it, but continued to remain there until it was finally installed in 1836 in its current location. The “small” chunk that broke out of the bell only weighs 11 tons. 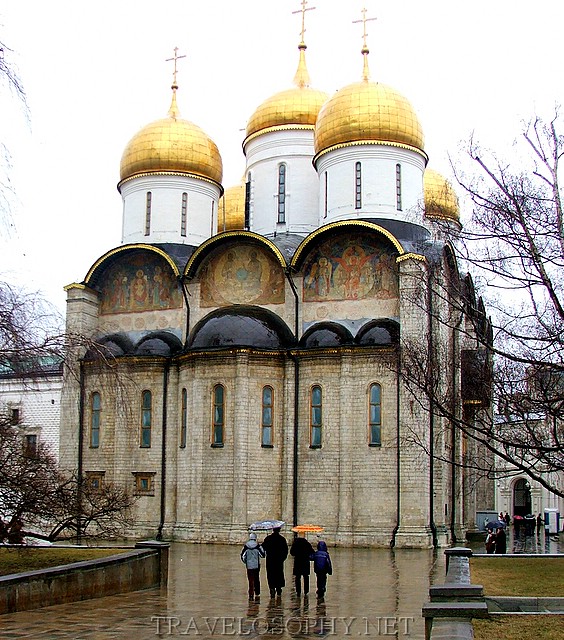 The Cathedral of the Assumption

Around the corner from the Tsar Bell, we proceeded into a large stone paved court yard where we were surrounded by several domed cathedrals and churches. A tour of both the impressive Cathedral of the Archangel and the Cathedral of Annunciation followed. For me it was a personal first to enter places of worship with such stunningly beautiful interiors. All of us were in awe at the gilded walls, pillars and domes decorated with blends of gold, silver and other coloured frescoes, icon’s (iconostasis) and paintings. Not having studied art history, but now being exposed directly to these sights had a strong impact on me and may well have been the spark that will lead to my future exploration of the subject.

The drizzle had subsided a bit and we strolled leisurely down the cobbled road, this one with no walking restrictions, past the Great Kremlin Palace where we lingered for some photo’s .At the bottom we reached the State Armoury, and queued to enter this promised must-see treasure trove of Russian artefacts. Elena took over from the other guide and provided us with a highly enjoyable tour de force of history on display, with views of court and coronation dresses, crowns and thrones, carriages and couches, gold and silver and most impressively an amazing collection of Faberge Eggs.

Fourteen examples are owned by the Armoury. Amongst them we saw The Grand Siberian Railway Egg which has a tiny replica of the Trans-Siberian Express. Apparently it could originally run for about 20 meters when wound up. It seemed to have later been broken by the Imperial House’s children of the time. Two other eggs, the Shtandardt and Azov have models of the Imperial yacht and cruise, while the Kremlin Egg plays the tune of “God save the Tsar”. Some of the other Faberge eggs had very beautiful and highly skilled decorations of diamonds or were carved from crystal. We were told that more Faberge Eggs should find its way back to Russia and probably to the State Armoury. Apparently a Russian oil magnate bought the world’s second largest collection in 2004, once owned by the Forbes family.

By now my mental notebook was filling up fast and sometimes it was a tricky balance between concentrating on the visual aspects of exhibitions while also trying to pay attention to the highlights of the information provided by our guides. The most restrictive aspect of all tours, are the always present time restrictions. In retrospect though, it’s high level, full schedule informative travel and certainly worth the money – as long as you try to take in as much as possible, which of course can be quite exhausting! 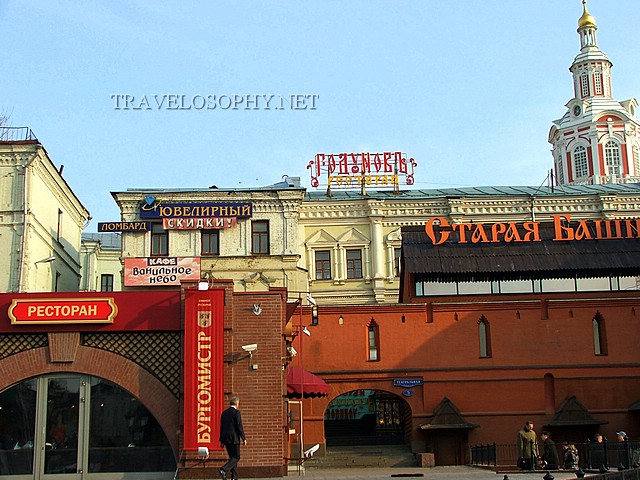 It was late afternoon when our tour of the Kremlin concluded and Elena invited us all for dinner at a restaurant near Ploschadt Revolutsii. Reasonably hungry by then and looking forward to a shot of that famous Russian vodka, this idea sounded like just what we needed to end our jam packed day on a very authentic note! 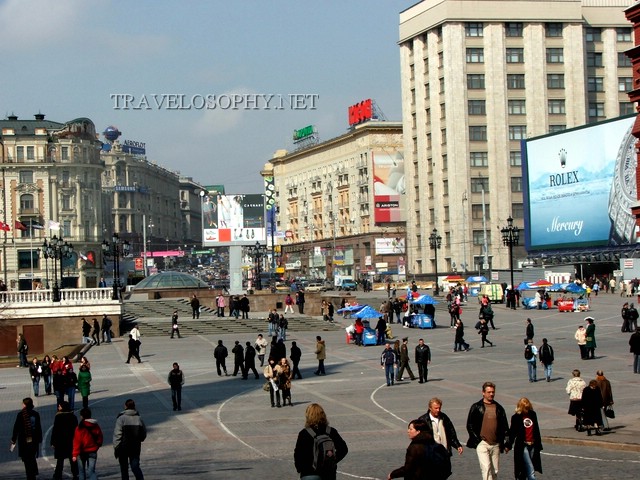