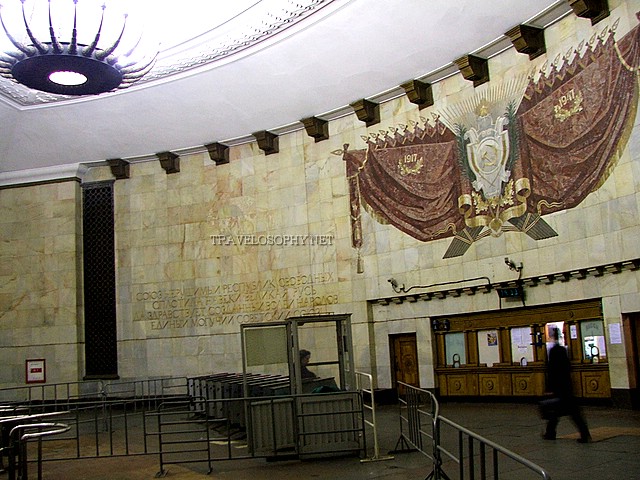 Sunday morning we left our comfortable hotel, a bit bleary-eyed and groggy, to brave the famous Moscow Metro. With a multi-pass ticket, Elena let us through the turnstiles at Izmaylovo Park Station where we stepped onto the steep-angled, deep-descending escalator. Vertigo sufferers beware! We kept to the right for rushing Russians to pass us by. Towards the bottom, I noticed a small cabin with a metro attendant, carefully observing the escalators; presumably to report on the malfunction of equipment and fare evasion. Seconds later we walked onto the wide, white marble platform and marvelled at the spaciousness, high ceilings and gallery ambience. The station was decorated with impressive pillars, small statues and chandeliers. In terms of decoration, this station was still meant to be conservative compared to others. Our destination was Ploshchad Revolyutsii, where we would head towards Red Square, close by. 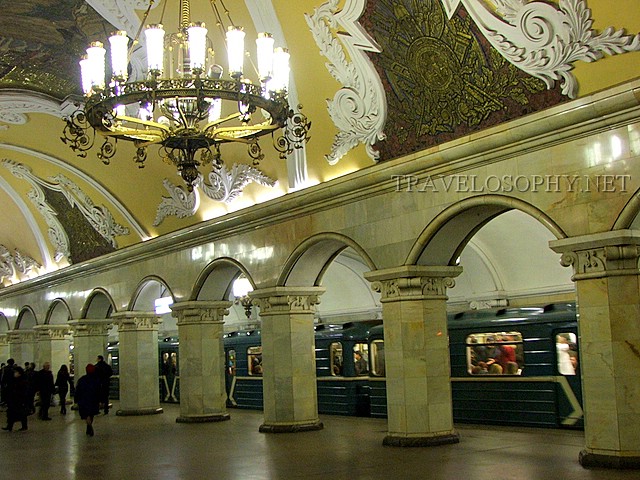 Onwards friends! We boarded the “green lightning” swiftly with the local Moscovites and squeezed in with rapidly closing doors behind us. A natural thing to do immediately was to try and read the Cyrillic alphabet. As suggested by guidebooks, some of us took the initiative to memorise the tricky Russian letters at home, but found that we had not quite yet reached speed-reading abilities, as required from a fast moving train. The hustle and bustle of passengers at the various stops made reading station names a difficulty, so the best way was to simply count them off. Twenty five minutes later, we successfully exited onto Ploshchad Revolyutsii and into the heart of the 850 year old capital of the Russian Federation. 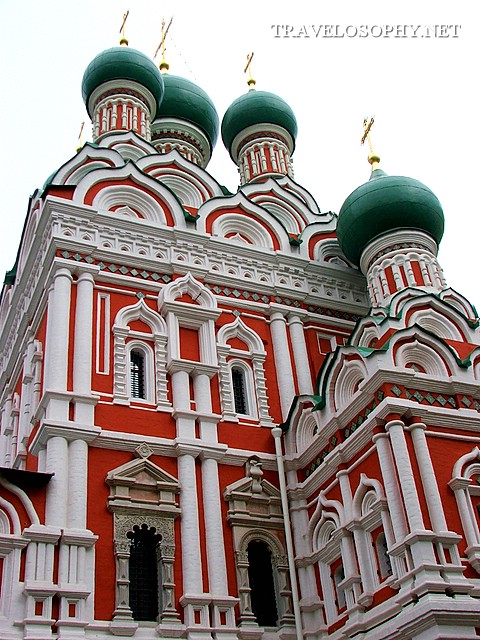 A walk around the “Kitay-gorod”, the inner circle of the city, familiarised us with the old quarter, after which we headed towards Red Square itself. On the way we passed the Former Lenin Museum, which had a communist party gathering taking place on its front steps. Next door was the Resurrection Gate which naturally framed the beautiful St Basils Cathedral in the background, hinting for us to enter. 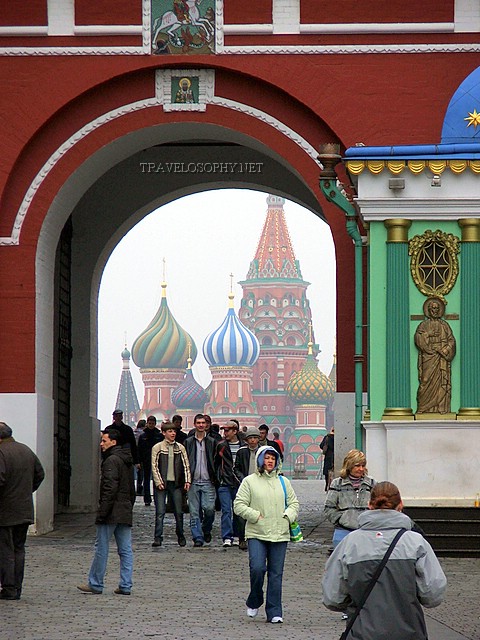 Instead we continued past the Historical Museum, to join the official and solemn queue leading to Vladimir Ilyich Lenin’s mausoleum. Stern guards were managing our line and it seemed that talking would have been inappropriate. It was raining slightly, the temperature had dropped and at that point it was skull-numbingly cold. I was sure that snow would happen. As we waited there, I was reflecting on what I had read about the reasons for Lenin’s body to be laying in state, embalmed, more than 80 years after his death in 1924. 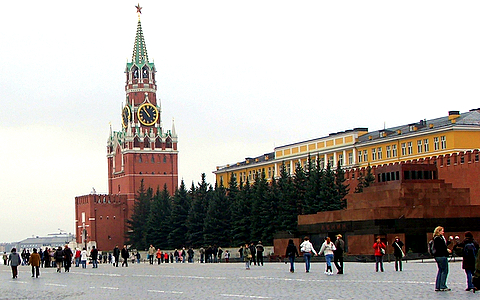 My thoughts were interrupted when the guards removed the barriers at the front of the queue. Up the hill we went, past the Historical Museum, and walked on the edge of Red Square to reach the mausoleum’s security control point. Mobile phones were their greatest concern. Past that, the guard at the tomb entrance asked again about mobile phones while observing our reactions expertly for any evidence of dishonesty, before letting us through with a faint smile. Then we entered the tomb and filtered into the dimly lit room, one by one and there he was, his body covered by a glass case, his face illuminated. The small figure, dressed in a dark suit and tie, looked eerily lifelike, his body amazingly preserved – if truly all of it is his. One could even make out some of the freckles on his face. The body’s fingertips were a discoloured kind of nicotine brown. We had to keep on moving. It was quite a strange, surreal sensation. Wanting to look closer on the one hand, not sure of wanting to be there on the other. Then we were outside in the light – a long 3 minutes after entering.We were in a tree-lined walkway, next to the Kremlin walls, flanked by various statues and graves of prominent Soviet & Russian leaders and members of past society. Some of the notables buried there are Maxim Gorky, Yuri Gagarin, Chernenko, Andropov, Brezhnev and Stalin (But to name a few). 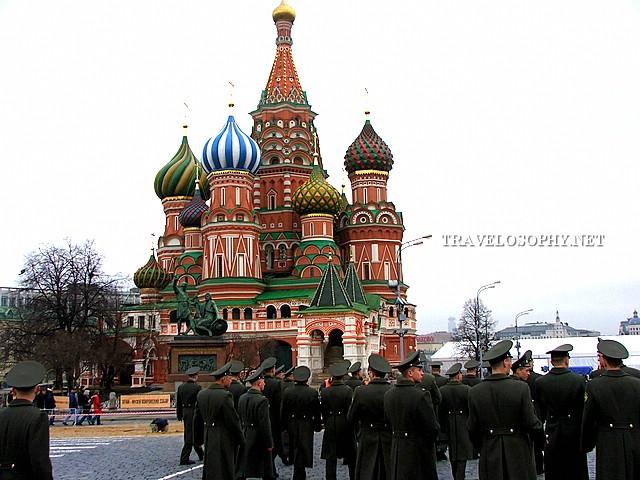 From there we walked onto the cobbled surface of Red Square where we found ourselves right in front of the “ice cream” cones of Saint Basils Cathedral. Several minutes in the drizzling rain was needed to take in the images and the atmosphere. Turning 180 degrees gave us a full frontal view of the Historical Museum. Groups of soldiers arrived on their day out. With their wide caps and winter coats, they were adding to the picture of the square. Some of them were capturing the moments on film, just as we were. With Saint Basil’s behind us, we had GUM, the most famous department store in Russia on our right, where we sheltered and waited for the rest of the group to catch up. 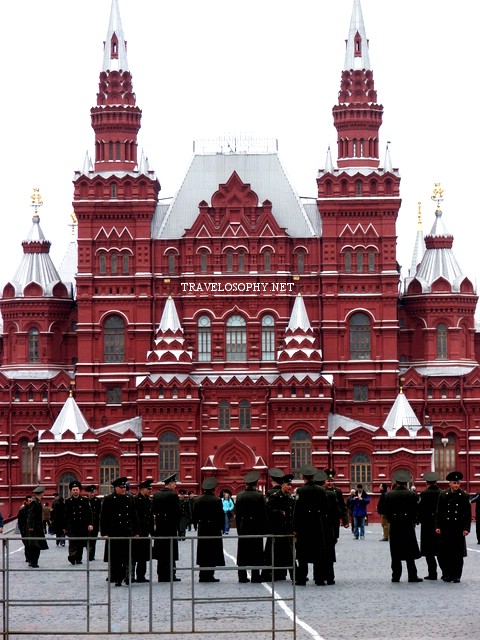 The Historical Museum on Red Square 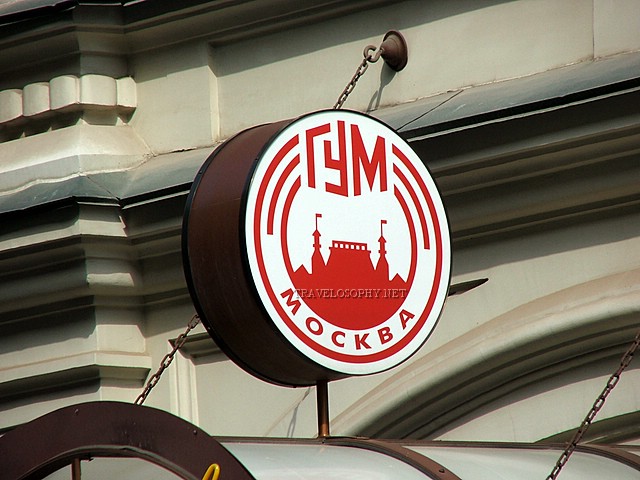 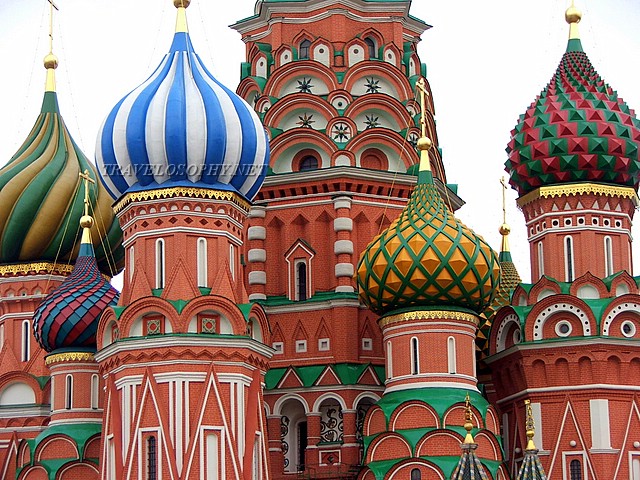 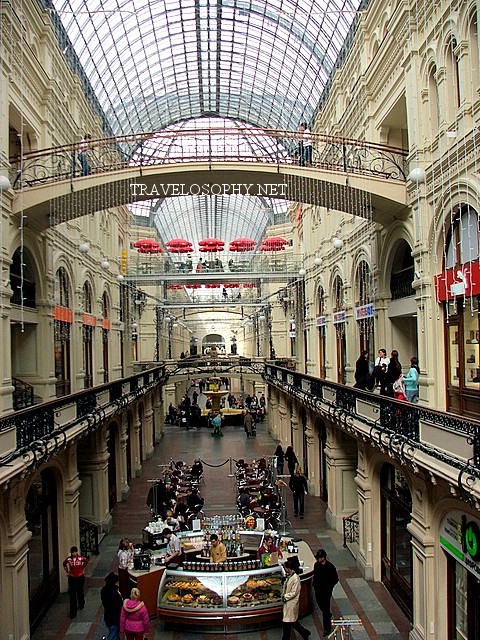 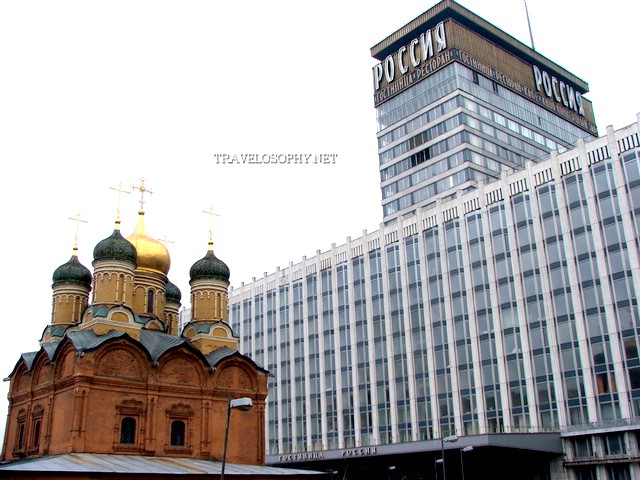 The Rossiya Hotel in Kitay-Gorod 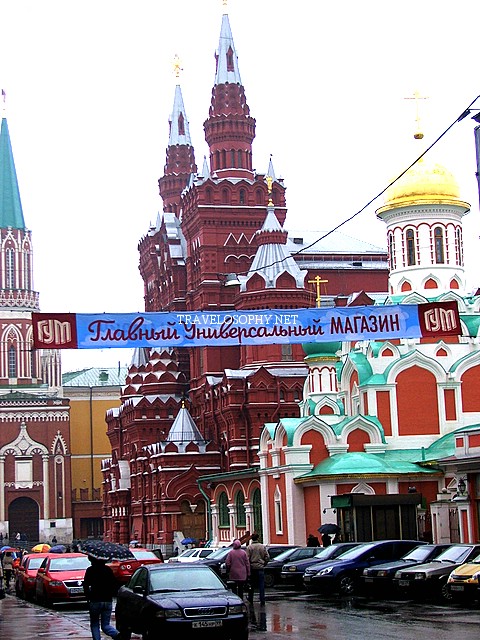