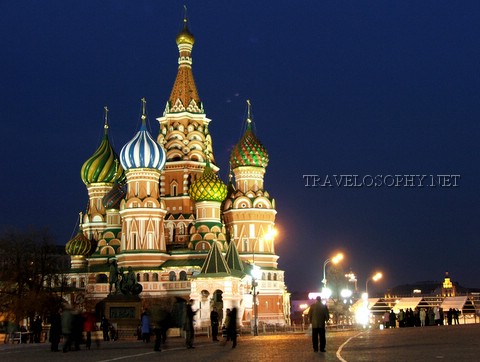 The scenery that was forming through the low, rapidly evaporating clouds as the plane descended, was a white somehow desolate snow covered earth. I could just make out fences and small houses dotted across the land here and there, with the odd vehicle travelling on a country road. It was the 8th of April and the Russian winter seemed to linger longer than in parts of Western Europe. The bare trees and flat, white earth resembled closely the image that I had in my mind of what Siberia might look like, but we were far from there, flying into European Russia, West of the Ural Mountains. And then suddenly we passed over some hangers and buildings before softly touching down on the runway at Moscow’s Domodedovo airport. With the clapping of hands from the passengers in my ears, I spotted some unfamiliar markings and emblems on several aircraft parked on the tarmac, as our British Airways Boeing 767 taxied towards the terminal buildings.

Inside the terminal building there was brief chaos as we reached the passport control area. Our flight was not supplied with landing cards, essential for arrival in the Russian Federation. The pilot signaled ahead to the airport and officials left cards in a small area for us, where passengers were frantically sharing pens and helping each other with Russian to English translations. After a very thorough documents check at customs, I was cleared to enter the country. Twenty minutes later, I found myself waiting in vain for my light backpacks to roll off the luggage conveyor belt. Another traveller and I was staring hopefully into the gaping luggage hole, when we were directed over to the lost and found department by a stern, female airports official. There was quite a bit of paper work to do, but the up-side was that they had information about my luggage, which was still waiting for a flight at Heathrow Airport. The sympathetic staff member assured me that it would be delivered at my Moscow hotel on arrival, possibly later that evening. “There’s nothing like a bit of inconvenience to sharpen the senses at the beginning of a journey”, I thought to myself, as I continued through to the arrivals hall.

I was booked on a 12 day adventure tour of Russia, organised by a tour company based in London. Usually I would travel independently and was not sure what to expect, but I was looking forward to an alternative experience. Once past the hordes of persistent taxi drivers, I spotted Natalia, our tour representative, who shortly afterwards lead our group onto a waiting coach for our hotel transfer. On-board, there were introductions and orientation. Amongst phrases essential for survival in Russia, we were told, the handiest one to remember would be a variation on “Yellow Blue Bus” (without the “S”) which could particularly thaw the ice in case of questioning by Russian police. The actual pronunciation is “Ya tebya lyublyu” which means “I love you!” in Russian and as Natalia explained could of course also have other useful purposes during our stay. Most importantly, she was wishing us a stereotype-breaking, unique experience of her homeland.

On entering the outskirts of Moscow, the bleak scenery was that of towering Soviet style concrete apartment blocks, lined up row after row, with open spaces in between, sometimes occupied by bare trees or children’s playgrounds. Bright neon signs and colourful billboards would break the monotony, pointing to businesses and shops on some of the ground floors. Cars and roads were muddy and so were the sidewalks from the thawing snow and sleet. The traffic was heavy as we got closer to the outer centre and we slowly made our way to our hotel, situated next to the huge 300-hectre Izmaylovo Park, named after the estate where Peter the Great grew up.

“Alfa Hotel” did not disappoint, situated in one of six blocks originally built for the 1980 Moscow Olympics. With its casino, internet facilities, dance club and sauna’s, it was better than what I had personally expected. We had a buffet dinner and further orientation later, when we met our fellow adventure seeking, country & continent hoppers and were introduced to Elena, our tour leader. On return to the 10th floor at 11:30pm; I was pleasantly surprised when the usually stern lady floor attendant, with a smile pointed to my luggage, neatly waiting for me beside her desk. I wished her a “dobry vecher” (good evening) and returned to my room where I enjoyed the busy metro and distant park view below from my window, before turning in after a busy, time-zone extended day. 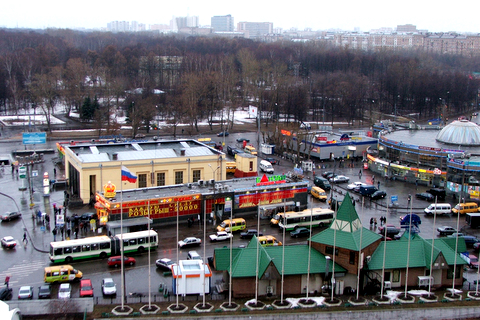