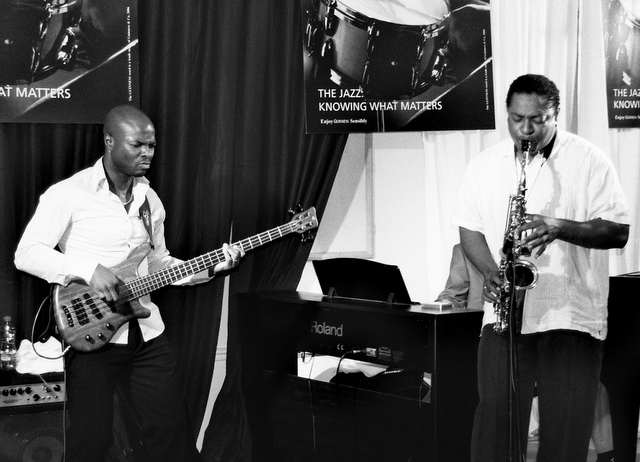 On Friday the 27th of October we, a few friends set off for Cork City on the south coast of Ireland. It would be the longest journey some of us had made since arriving on the Island. A full six and half hours from north to south. It was the one weekend of the year, according to my friend Victor, which deserved a visit to “The People’s Republic of Cork“. Why this Marxist-sounding nick-name? Well, according to rumour it had something to do with the locals not being too impressed with Dublin becoming the capital of Ireland back then, considering they had put up such a great fight during the Irish War of Independence, after all. National resistance hero, Michael Collins hailed from that area and era too. There are others who say that the name was influenced by a certain Che Guevara, whose grand mother hailed from County Cork and went by the family name of Lynch. An added ingredient to the “People’s Republic” idea were the red uniforms of the Cork Gaelic Football Team. It was probably inevitable that someone might become creative with so much folklore and history abound. Thus, according to several sources, in 1997 a few Corkonians dreamed up the catchy name over a few pints of the local cream, also known as Murphy’s Irish Stout. 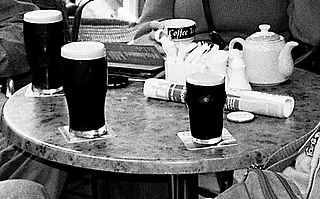 Dubliners, naturally considered this to be a bit pretentious, but folks from The People’s Republic might say: “That’s just them showing a bit of green, cause they can’t claim the same”. The rivalry continues, but as far as the arts go, Cork has done well for itself as the official cultural city of Ireland and in 2005 it received the prestigious European Capital of Culture award. 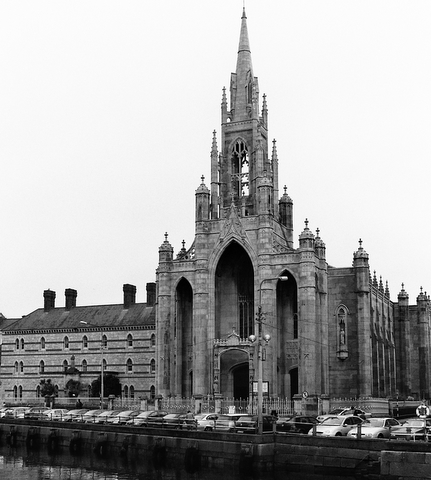 On this particular weekend in October the city was hosting the annual Guinness International Jazz Festival and the town centre was abuzz with atmosphere and brassy sounds. It was also the perfect opportunity for four “adopted” Belfast boys and girls to take a trip Down South to the Republic of Ireland – and Cork. Two of us, Maria and I, were to lose our status as newbie jazz fans. Victor, our jazz expert and trip organiser, made sure on the way down to expose us to quality jazz tracks and samples on the car stereo. On arrival at our hotel we dumped our luggage, freshened up, knocked back a couple of Bushmills whiskeys and headed straight for the Everyman’s Theatre by taxi. Our tickets were pre-booked for two acts in tandem; Hiromi, a highly rated Japanese pianist featured first and then head-lining afterwards was Branford Marsalis and his Quartet. 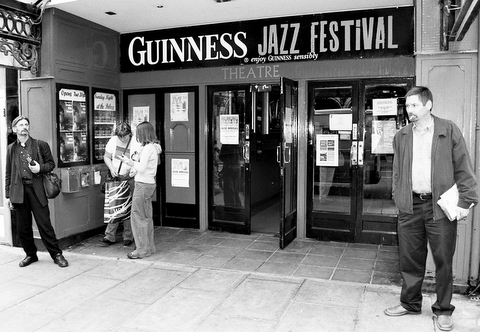 The first act was fresh and inventive, original and highly skilled and I think we were all very much agreed on that. With Branford Marsalis, a more famous and seasoned artist, some of our opinions differed. His quartet would probably fit more into the John Coltrane sector of the jazz genre, with multi-layered and complex sounds, probably catering more for the connoisseur with a well developed palette. Nevertheless, it was a captivating and extensive performance and they were extremely popular with the audience. Later on, back at the hotel, although exhausted we stayed up late and discussed this brilliant first outing in Cork City. 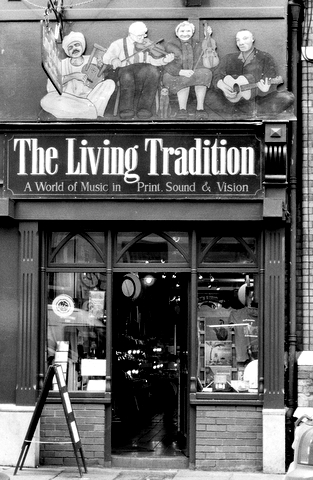 Music store opposite from the Everyman’s Theatre

The following morning I headed down town earlier than the rest, looking for photo opportunities. The city centre’s atmosphere, style and architecture just oozed culture. The Cork accent is famous, yet makes quite an impact when exposed to it for the first time, just a little bit like the stout they serve around there. The locals I met were friendly and inquisitive, maybe not what you would expect to find in a popular touristy city centre. 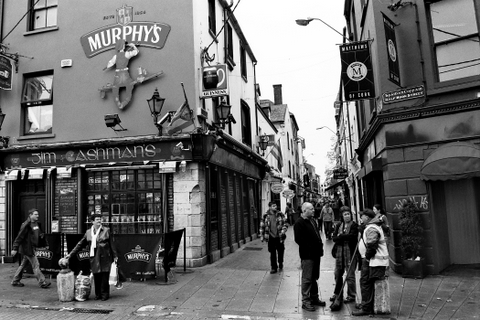 After criss-crossing the old streets for a while, I ventured down a small street next to a narrow park and discovered an old style hairdressers, called John’s Hair Studio. Through the window I could see much of the décor, which included classic old barber chairs and other dated bits and pieces. I couldn’t resist going in for a better look and John kindly allowed me to capture a few images on film. We got talking and he wanted to know how long I had been based in County Antrim. After my reply of “a bit over two years, on and off” he commented on what a “straenge blend” the Southern African and Northern Irish accents made. 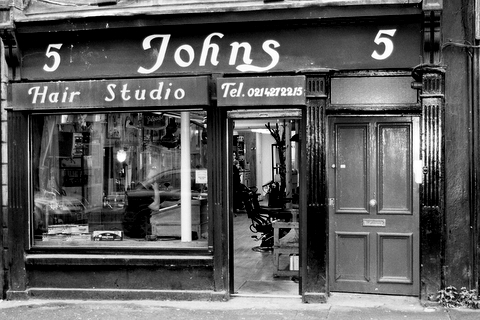 I carried on exploring leisurely for over two and a half hours, finished a roll of film and then made my way back to the tourist information centre where we all agreed to meet up later. Our small group wandered to the old quarter, found a pub with outside tables and indulged in a very satisfying meal, along with a couple of pints. They didn’t serve Guinness or were “out of supply”, but our waitress seemed very keen on serving us the local black stuff instead and assured us with a wink and a smile that “It’s much better than Guinness anyway (!)”. We tipped generously and she seemed pleased to have helped us convert.

The Gresham Metropole Hotel, over the river and up the hill, was our next stop, the hosting point for the annual Guinness Festival Club. Here they served loads of sponsored Guinness on tap and more than ample jazz on stage. Very unpatriotically, there wasn’t a pint of Murphy’s in sight. The swanky, red carpeted venue was thoroughly converted for the event; with all three floors boasting three stages and three bars. The place was heaving and sighing with elegant socialites and jazz aficionados. We spent most of the rest of the afternoon and evening wandering about over here. Once the bands fired up, we followed the best sounds around, for hours. Our group split up and we naturally followed our individual “jazz intuitions”, while bumping into each other occasionally. Amongst others, we experienced the “Shape Jazz Orchestra” (a NATO band), “The Big Band Explosion” and “Vincent Herring’s Earth Jazz Agents” (photo above), the latter a personal favourite. 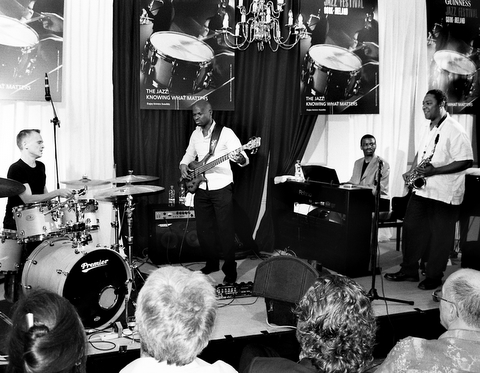 As the evening drew on, the Gresham Hotel developed a pleasantly overcrowded and highly festive mood, unlike what I had experienced in a long time. The clocks moved forward by one hour and prolonged the evening even more. Towards the very end, we chose to see a band from Latin America and unlike any of the others, this group had vocals with two singers doing the honours. Within ten minutes any inhibitions still intact were shed by the crowd, as everyone who could find space lapsed into exuberant and spontaneous dancing. It was a true grand finale and people lingered and milled around in the foyer for a period of time that seemed endless, while chatting and finishing off their drinks, before reluctantly drifting away. 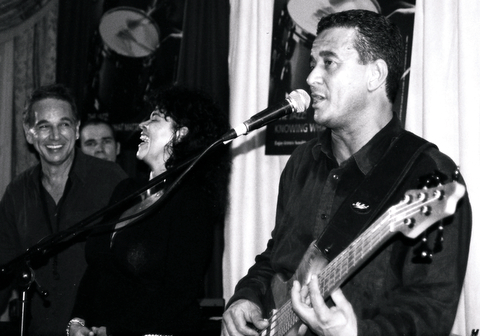 Catia and Carlos and the Boys from Brazil

There is a small fishing village not too far form Cork, called Kinsale. The following morning we headed out to explore. It’s a classically quaint little town where the jazz fringe festival is hosted. Not to be missed if you find yourself in the area. While visiting Cork and surrounds, I had that sensation which every traveller longs to experience every once in a while. Discovering a real Gem. 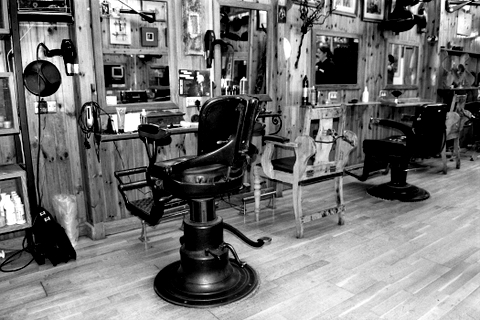 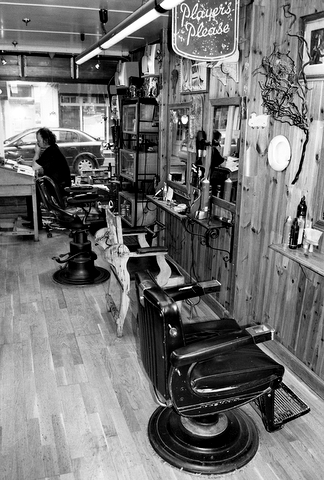 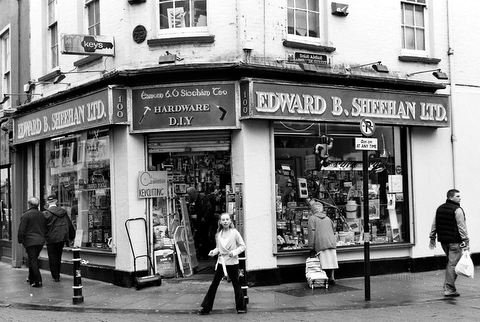 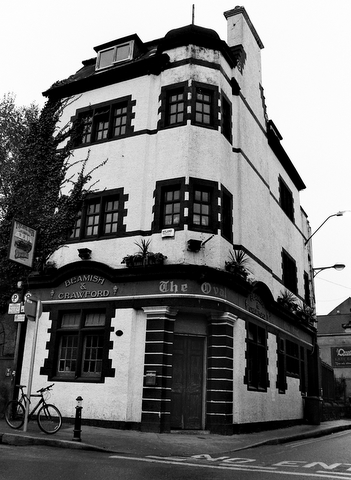 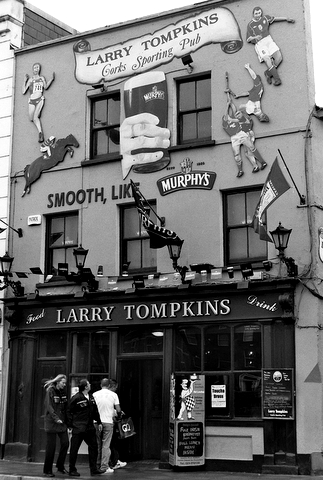