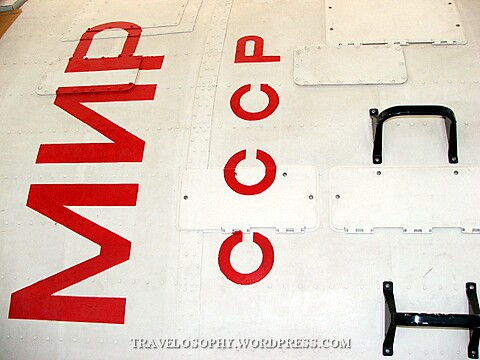 We left Moscow in a coach, with the word “Sputnik” appropriately marked on its sides. The driver was taking the slightly pot-holed motorway through the Russian countryside to The Gagarin Cosmonaut Training Centre 35 km’s away. For us it was additionally exciting to be aware of the fact that the next day was also the 45th anniversary of the first man to have entered space in 1961, Yuri Gagarin, after whom “Star City” was named.

A few seats in front of me, the middle aged Australian couple was listening attentively to our tour leader Nadya while she shared an interesting tale with them of how she experienced a massive culture shock when she arrived in the United States a few years ago as a camp councilor. I could only catch pieces of the conversation and after a while I decided to turn the volume up on my Walkman while observing the passing forest scenery from the bus window. As we crossed a bridge over an iced-over river, I spotted a glimpse of two fisherman, sitting on small wooden boxes, holding fishing lines that were dropped into the icy water through the round holes which they drilled into the solid surface. Several miles on, Nadya pointed to the horizon, where a gigantic satellite dish dominated the skyline.

On arrival at the Star City gates, an official car was waiting. After a few words with our driver and tour leader respectively, we were escorted by an official car into the base. Nadya explained to us that it being a live training centre, we had to be accompanied by a dedicated guide from the base, who was also a Russian to English translator. As we continued down the bare, tree-lined lane, she discussed how global warming is already affecting the Russian climate in a visible way. Temperatures at the start of the seasons had become more unpredictable and this was an exceptionally cold winter with some of the lowest temperatures recorded, around minus 40 degrees celsius.

Star city is a self contained village with amenities and shops, where all employees live and work and it forms the natural hub of activities in the local area. After a short wait we disembarked and were led to one of the main buildings. There we came across a large group of visiting Russian Police Academy recruits, posing for photos. A few moments later we passed through the doors and deposited our coats and bags in the cloakrooms. Some members in our group could not resist the temptation to try on some of the wide Russian police officer caps, with giggles and laughs and had their photos taken. 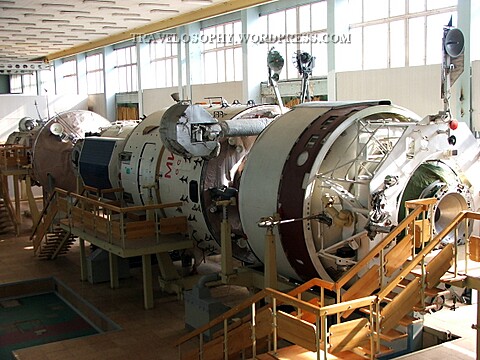 Upstairs, we entered a lecture room with a view of the MIR space shuttle simulator below us. Here the Russian officer gave an introduction to Star City and some background about Russia’s historical role in the international Space Race. Interesting bits and pieces of information emerged. The centre had been built in 1960, shortly after NASA and in 1961 Russia managed to beat the U.S in the race, by putting Yuri Gagarin into space. Since Yuri, it has been the training centre for all Russian cosmonauts. Unlike the U.S, Russia traditionally sends smaller teams of 3 cosmonauts into space and the trips are much longer in duration. Star City today is largely privately funded, since the Russian state withdrew much of its funding in the 1990’s. Famously that event created opportunities for Space Tourism. Billionaires and tycoons with money to burn pay 20 million dollars a go for Star City and a round trip. While onboard they’re allowed to conduct some personal projects such as photography, research or Blogging from Space! So far three private individuals have contributed to the program, including South Africa’s Mark Shuttleworth. If ever destiny could be read in a name… Four prospective Japanese space tourists were undergoing training at the centre while we were there. 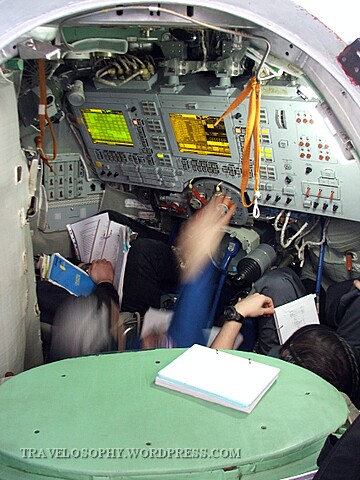 In the simulator room, downstairs we were shown various pieces of equipment used by cosmonauts onboard the earlier shuttles like MIR, which orbited in space for 15 years before being brought down to earth in 1991. The officer explained the workings of the internal waste disposal and oxygen generating systems. We were also shown various examples of vacuum packed and compacted space food items. As we walked around the “MIR”, an explanation followed of the special layers of material used for insulating the shuttle, all capable of withstanding very extreme temperature fluctuations. 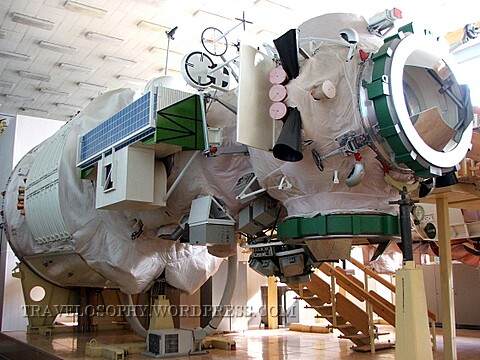 We were then allowed to enter the cockpit, three at a time, and were shown various on-board items, including a fold-away exercise bicycle, which was used to keep cosmonauts in shape in a weightlessness environment. While inside, the official was still answering our questions when we heard loud Russian voices outside the door. It was a group of the Police Academy recruits, impatiently insisting for us to finish, so they can have a look too. Our guide firmly told them to wait their turn and attentively took his time in making sure all of our questions were answered, leaving Nadya on the steps outside, having to resist multiple requests for her mobile phone number by twenty young and eager Russian police trainees. 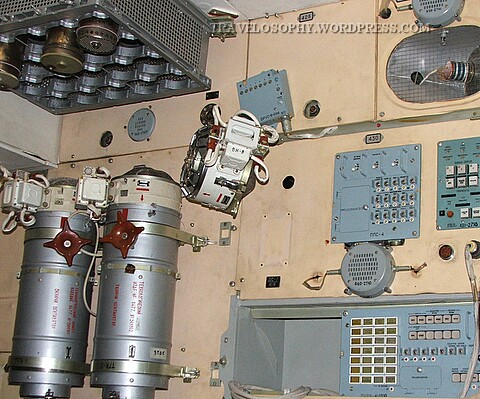 From there we moved through various corridors to another large hall with a simulator of a Soyuz capsule. As far as space craft go, the Soyuz family has been assessed to be very reliable and has been in use the longest of all space vehicles since the Space Race started. They were originally used to transport cosmonauts to and from the MIR space station and are still the current International Space Station’s crew returning vehicles. Every six months, the ISS receives a new Soyuz capsule. When we arrived in the Soyuz hanger, training was being conducted inside the simulator. We were allowed to take non-flash photographs but had to keep our voices down. The guide continued to provide us with interesting facts and it was becoming increasingly difficult to keep up with the bombardment of information. I started realizing indeed how vast the Star City complex was and that we would regrettably only be able to touch on the highlights, due to time constraints. Nevertheless, I would certainly come away from there with a highly rejuvenated interest in the subject of space travel! 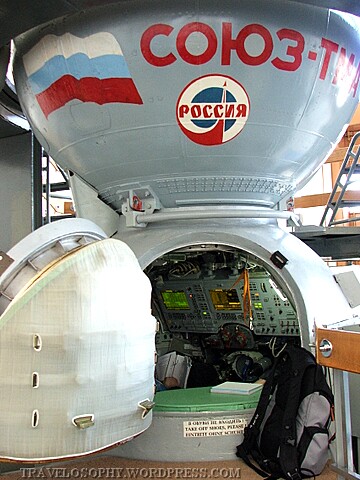 The Hydrolab contained a submersion platform with the outer shell of a shuttle assembled on top of it. As part of their space walking and shuttle maintenance training, cosmonauts have to dive down to the submerged “shuttle” to which they have to make underwater adjustments. The density of the water closely resembles a weightlessness environment. We were told that the only unnatural aspect of using neutral buoyancy to simulate microgravity is the drag-effect caused by the water. We spent quite a bit of time in the overhead observation area, after which we had the opportunity to watch a video on cosmonaut training. 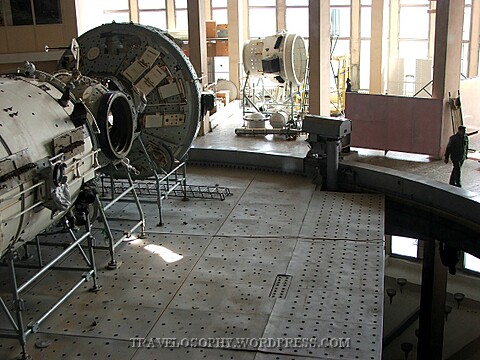 Unfortunately for us, the gigantic centrifuges in the Centrifuge Building, which imitate the lift-off-G-forces cosmonauts would experience, were on that day occupied for training and it was not possible for us to enter. How I wished I had $20 million! We had some time to take photos outside, before we were invited to have lunch at the Star City dining hall for officers and cosmonauts. Several courses of Russian fare were served in the mess-hall. It was well presented for a military base and I personally chose to wash my meal down with a quality rich and dark Russian beer.

Back on the coach, as soon as we left the base, Nadya delved into a goodies bag which our dedicated Star City guide gave her to pass on to us as souvenirs. Inside were various samples the space food we saw earlier on and I ended up with “food in a tube”, a kind of a high protein apricot fruit paste. We were all in agreement that it was a fascinating day. Most of us dozed off on the journey back to the capital, where that evening we would board a long distance train to the city of Pskov, a 12 hour journey away, close to the Estonian border. 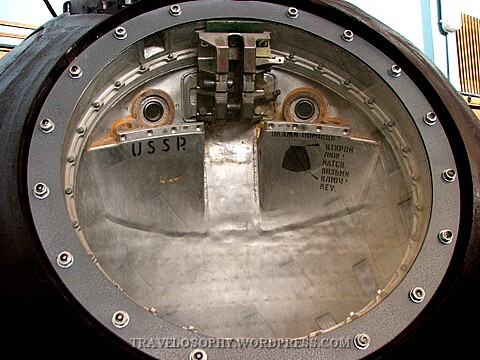 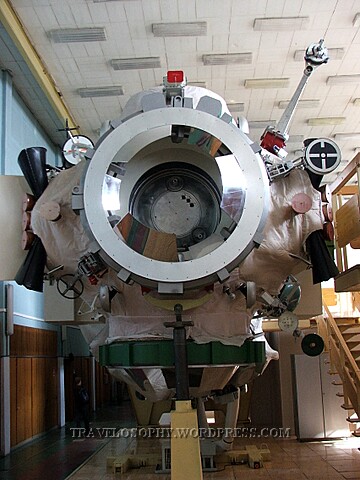 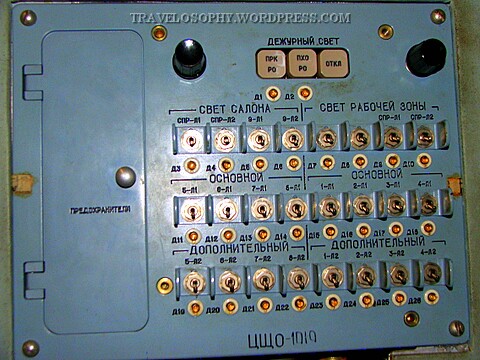