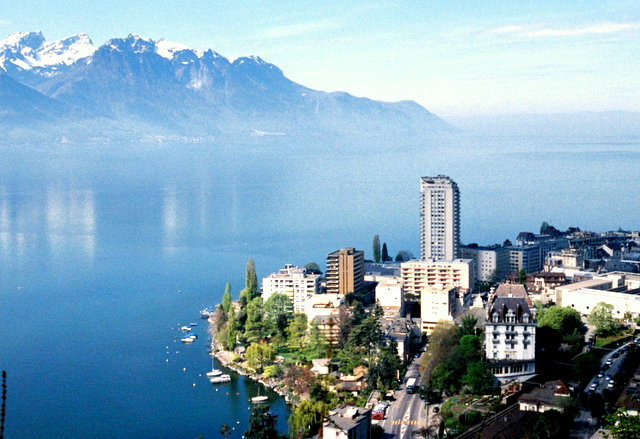 On the 26th of April I arrived in Switzerland for a five day visit. First of all I decided to drop by the United Nations, situated in a leafy green parkland area, just a 15 minute bus ride from Geneva International Airport. Unfortunately they were not open for visitors at this time of the year, but I took some photos and enjoyed the scenery, before continuing my journey out of the city.

So what brought me back? Well, my visit to Zurich and Lucern the year before was so good, that I made a point of returning. This time I decided to head for the Swiss Riviera, which includes Lausanne, Vevey and Montreaux along the North Easy shore of Lake Geneva. I chose Vevey as my base during my stay. Of the three cities, Vevey is the most tranquil and has a very quaint atmosphere with of course a very French flavour. The lake-side area has snow capped peaks as a backdrop, with river boats passing by and a relaxed, not crowded promenade. Amongst other famous people who frequented this area, Charlie Chaplin actually settled in Vevey and is buried in a local cemetery. 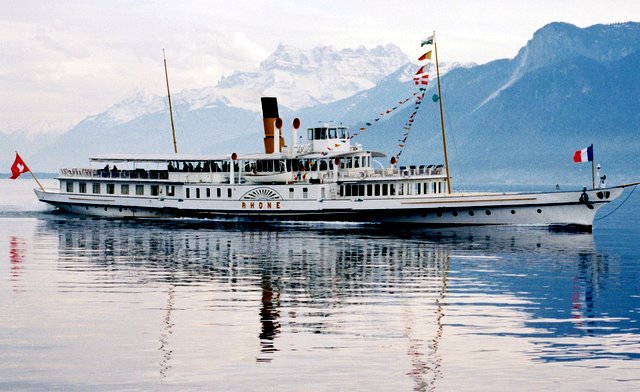 On my first day I headed out to ‘Les Pleiades’ (alt. 1400 m) and ‘Mt-Pelerin’ (810 m), two mountain peaks accessible by cog trains which twist and turn up the mountains on thin rails at very steep inclines. When the gradient is very steep, we can often find a ‘funicular’, a type of cable train to complete the journey. These rail trips are as scenic and as much part of the experience as the actual views from the top. After exploring the mountain areas and look-out posts, I did short hikes in the surrounding forests. In the case of Switzerland, words can hardly describe the scenery, but let me try to give you an idea. 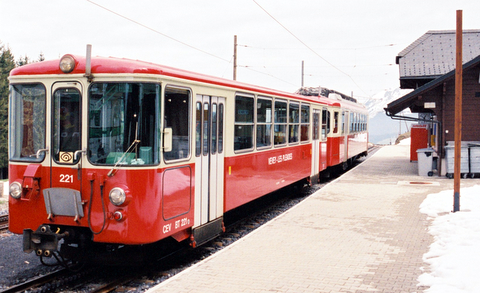 Montreaux, famous for its Jazz Festival was my destination on my second day and as a bonus, early summer launched itself in full glory! I was not disappointed. It’s a true Riviera city and very vibrant , but not as large as one might expect .The lakeside and busy promenade have an abundance of flowers, including lots of tulips, with trees, small parks and open area restaurants. As everywhere around the lake, the Alps again provide a backdrop. The fact that it’s a playground for the rich and famous is very apparent with all the trappings that one might expect. A very appealing city to visit in so many ways. 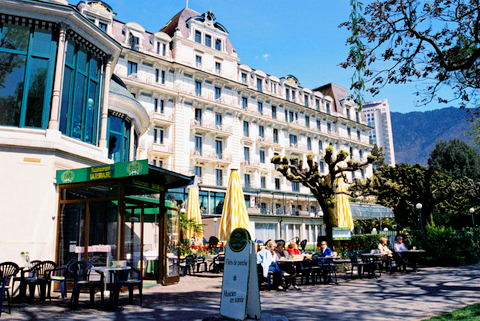 During the afternoon I went up to ‘Rochers-de-Naye’, the highest point in the area (alt. 2045 m). The funicular trip was amazing as we passed from a forest area into higher altitudes, completely covered with snow. After we disembarked at the mountain station, it was a 75m walk in knee deep snow with another fifty meters or so of climbing to reach the lookout platform. From there one had a magnificent 180 degrees view of multiple rugged layers of snow capped Alps. The other 180 degrees gave a brilliant view of Lake Geneva, here known as ‘Lac Leman’ and on a clear day as the one we had, one can see a vast section of the valley, its villages and the lake. 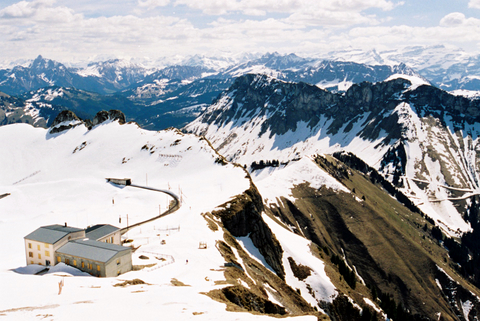 After returning to Montreaux, I headed straight out on another ‘Golden Pass’ train to ‘Les-Avants’, a small truly Swiss village more than half way up the other side of the mountain. After taking in the views I decide to do a hike all the way back to Montreaux. This took me through rain forest areas with waterfalls, narrow paths and hang bridges. JJR Tolkien might have been inspired if he could have joined me. The walk entered Montreaux’s old city parts in the north and eventually led me all the way back to the train station. I was ultimately rewarded with a classic sunset over Montreaux at about 9 PM as I entered the city. 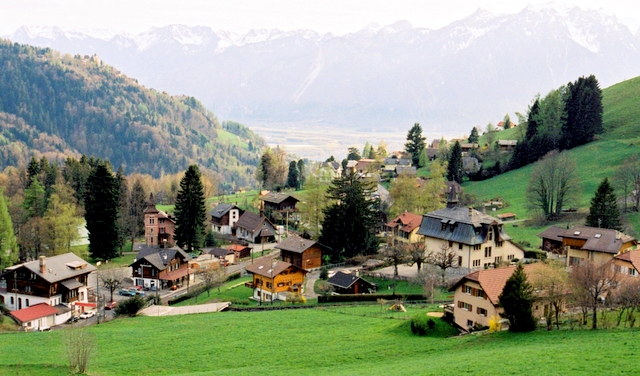 On my final day I enjoyed the Saturday food market in the Vevey town square, before heading off to Lausanne, Switzerland’s third largest city. It was bigger than I expected and a bit too busy after spending time in the other two slightly more tranquil resorts, but it’s a very attractive city none the less. The Dolce & Gabana, Prada and Gaultier crowd was out in full force, striding the sidewalks and blowing Swiss Franks in the boutiques and malls. I made a quick visit to the lake side area, but after about three hours decided to head back to Vevey. My legs were giving me a bit of ‘uphill’ due to my mountaineering of the day before and I returned to my pleasant youth hostel in Vevey for a relaxed evening with fellow travelers, before preparing for my departure to Poland the following day. 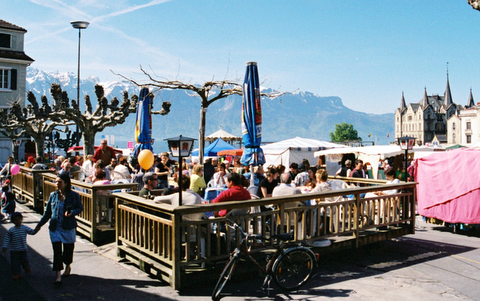 SUISSE ON A SHOESTRING:
O.K, so you don’t have to be rich and famous to visit the country of the rich and famous! Here’s a tip – if one budget’s well and not buy souvenirs, choose self catering hostels and buy multi day pass train tickets (which would include your cable car and funicular trips), a four to five day visit can be done for as little as 350-00 to 400-00 Euro – all inclusive, except flight tickets, which can be picked up quite cheaply from Easy Jet. Or other low cost airlines, if you’re arriving from Europe. I couldn’t recommend the Swiss Riviera more, a a destination well worth visiting and if you’re into filling your days up with maximum activities, a day in Switzerland can feel like a week! There’s so much to see. Hope I’ve whet your appetite… 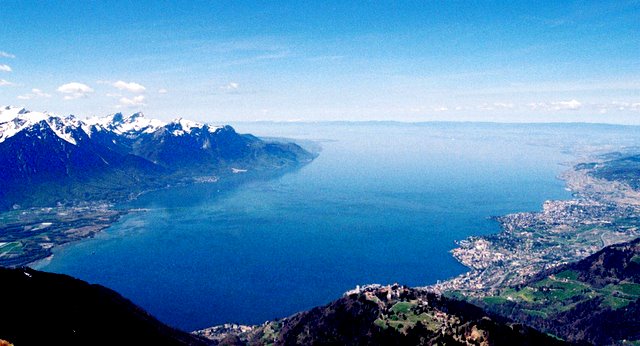 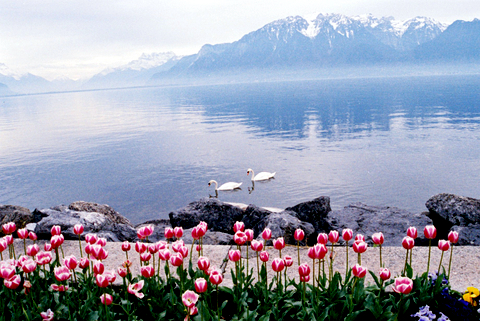 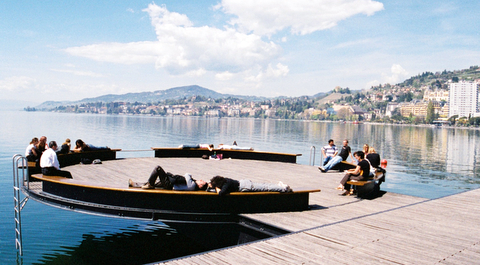 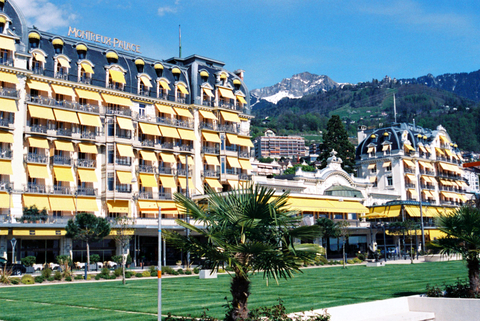 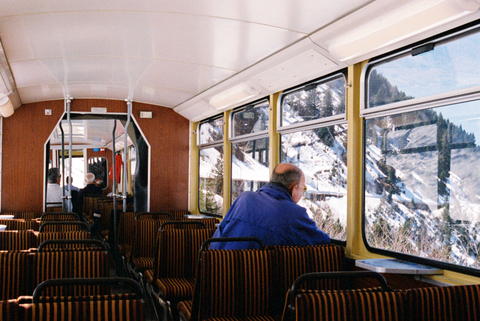 On the way from Rochers-de-Naye 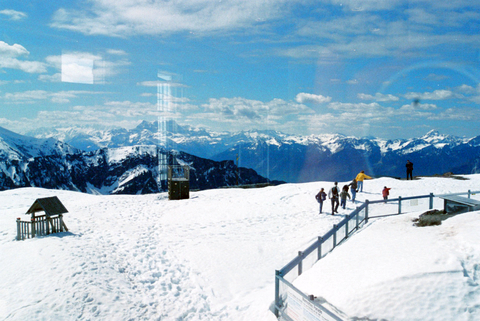 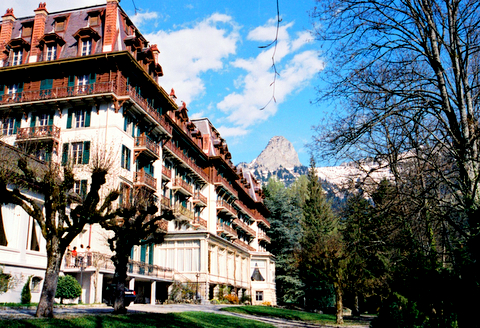 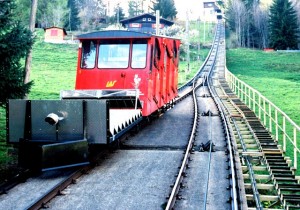 One thought on “The Swiss Riviera”